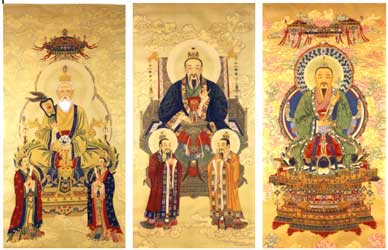 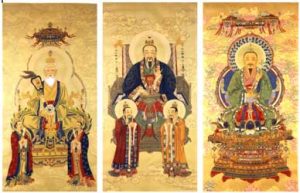 “The Three Pure Ones” is the avatar of Taoism. AVATAR is a word that is commonly heard but rarely understood. In English, the word has come to mean “an embodiment, a bodily manifestation of the Divine.” The void or great emptiness, in the beginning, is called “Wu Chi”, or primordial chaos, at this state the Tao is a dispersed form or “Chi” when reunited it is transformed into a divine being. This divine being is Tai Shang Lao Zun or Supreme Patriarch Lao Zi.
He then transforms the “One” which is Primordial Heavenly Worthy or Reverend Yuan Shi of Yu Qing. He holds a flaming divine pearl which represents the creation of the Universe, however, at this stage, the Universe is in a chaotic stage.