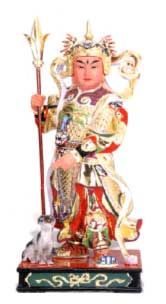 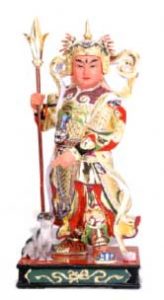 Erlang Shen (二郎神), named Yang Jian (杨戬), is a Chinese God with a third true-seeing eye in the middle of his forehead.  According to the “Story about Li Bing and his son in harnessing the rivers”, After being appointed a governor of Sichuan by King Zhao of the State of Qin. Li Bing diverts water from the two rivers of Chengdu to irrigate a thousand hectares of farmlands. His son ErLang helps him to build water control systems to prevent a flood. Based on a historical record says, “The Erlang Temple of Guan-Kou in Sichuan was established to commemorate LiBing’s merits in opening up wells, building bridges, irrigation of the agricultural lands, developing the Guanxian area and Chengdu plain, and increasing agricultural production.

Here is another legend about ErLang with his seven friends vanquishing an evil dragon. On their journey ErLang and his seven friends approached a thatched cottage by a river near the county town of Guanxian, they heard someone crying inside. They entered and found an elderly woman waiting for her youngest grandson who was to be taken away as a sacrificial offering for the river god-an evil dragon. Astonished, ErLang seeks his father advice on how to capture the monster. LiBing taught him a strategy, on the sacrificial procession ErLang holding his three-pointed and double-edged sword in hand went into the River God Temple with his seven friends and hid behind the altar.

The old woman who had been grievously crying for her grandson gave ErLang a chain to express her gratitude for saving his grandson. ErLang tied the dragon to a stone post of the Vanquishing Dragon Temple and had it detained in a deep pool. From that day onwards, the area was free from flood.
ErLang is depicted carrying a three-pointed and double edge-sword and has a Celestial Hound that follows him around.

Be the first to comment on "Er Lang Shen, 二郎神"